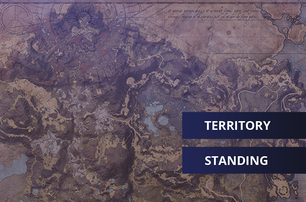 Here you can buy New World Territory standing. As you know, the map of New World is divided in multi...
More Details
As you know, the map of New World is divided in multiple areas. Every area has its main settlement. You can increase your Standing level in that region by: Town Board Missions Killing enemies Crafting Gathering Refining Discovering landmarks Quest rewards Once you have gained enough standing, you will level up your standing within that territory, and will be rewarded with a point to spend which will grant you a permanent buff while in that particular zone. At each level, you choose one buff out of 3 to 4 choices. These buffs may include: Standing Gain - Earn more Territory Standing when performing actions within the region. Trading Tax - Decrease trading tax rate by a certain percentage for the current region. Gather - Increase resource gathering speed by a certain percentage for the current region. Station Fee - Decrease crafting fee by a certain percentage for the current region. Storage - Increase storage space in the region's settlement. XP Gain - Earn more XP for actions when inside the current region. Faction Tokens - Earn more Faction Reputation when completing Faction Quests within the region. House Ownership - Players will unlock the option to buy a house in the region's settlement (At level 10 Territory Standing). Once you select the bonus, it will become active. Keep in mind that you can’t redistribute the points, later on, so, be careful when you spending your settlement points And remember, these bonuses work for that particular zone only and stay always active but only while you are inside that zone. So, basically it might take a long time to upgrade your territory standing, but with our professional WowCarry boosters you will get desired level of settlement you need with a very short time.
10% OFF
FIRST PURCHASE
Success
We sent you a confirmation letter, please check your e-mail.
Make sure to check your spam/junk folder
OK
Oops! It looks you are already subscribed to this promo.
OK